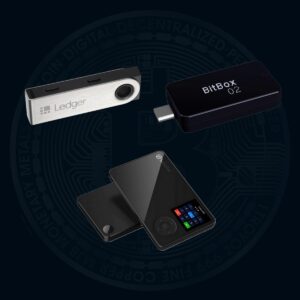 Hello, if you’re reading this article most likely you’re looking for a way to protect your Bitcoins, I understand you, untangling among so many software wallets is not easy.

Probably by studying bitcoins you will have asked yourself the question of what a private key is and how to move your cryptocurrencies from the exchange to your PC, managing your keys.

As the famous phrase “not your key not your bitcoin” says, holding private keys is the only way to own bitcoin.

The technology is complex and in this article I want to propose you three simple hardware wallets, cheap but complete, to start entering the world of bitcoin and self custody. I’ve decided to introduce you to three different hardware wallets, but at a similar price.

Let’s start with the best-selling and famous LEDGER NANO S.

Surely the name is not new in fact Ledger is the market leader in terms of hardware wallets sales, more than two million have been sold and although not brand new, Ledger Nano S remains a guarantee, and is ideal to start experimenting with hardware wallets.

Another inexpensive but extremely interesting hardware wallet is SAFEPAL S1.

Safepal S1 is a hardware wallet funded by the most used exchange in the world BINANCE, which makes it the ideal tool for those who work on this exchange and with the entire Binance ecosystem.

Unlike the Ledger, the strong point of the Safepal S1 hardware wallet is that it is completely Air-Gapped is completely disconnected from any online device, in fact it is devoid of Bluetooth, Wifi, NFC or USB connection, and uses a QR code-based system to validate transactions as the most expensive hardware wallets.

He also uses a secure chip like the Ledger and adopts a self-destruction systems when the password is wrong.

Another hardware wallet with competitive price, slightly higher, but done really well, is the BITBOX02.

This new generation hardware wallet is produced by the company Shift Crypto in Switzerland, and as for the other two hardware wallets Ledger Nano S and Safepas S1, inside there is a Secure Chip, indeed the Bitbox02 contains even two, which makes it even safer and more secure.

In addition to this dual security system, the Bitbox02 is fully Open source, uses a bootloader with security functions, each Bitbox02 contains an authenticity key installed in the production phase and the entropy to generate the SEED is at the highest levels, also to increase the security who wants can compile the firmware to have 100% security and privacy. In addition to all these security systems the Bitbox02 has a very well made design, with a large OLED touch display, a usb-c connector and a port for the microsd used for backups through the Bitboxapp.

To interact you use a series of gesture touch and the coins are managed with the app Bitboxapp, also can be directly connected to a smartphone and then can be used on the move.

For the most demanding there is also a firmware version that only supports Bitcoin, so simplifying firmware security is even higher by reducing attack vectors.

In the package you will find in addition to the Bitbox02 compatible with Windows, macos, Linux and Android, a microsd, a usb-c extension cable, a usb-a (normal) adapter to usb-c, a string and stickers.

You may be wondering why there is no TREZOR ONE among the Hardware wallet I chose, the main difference is because the Trezor One does not contain a secure hardware chip, compared to the three models above, but it is not a hardware wallet to discard, First of all it was the first hardware wallet, precursor and innovative in the crypto sector, it is completely opensource which makes it easy to interface with many software wallets, with the software Trezor Suite has become even more user friendly and so why not buy it ?

You can find it here:

If you liked this guide to the best cheap hardware wallets, share it on your social media!

Hello, to the next article.