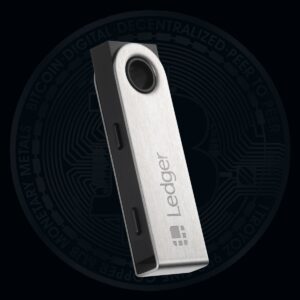 The Ledger Nano S, is the ideal hardware wallet if you don’t feel the need to move many cryptocurrencies at the same time, as its ROM is not very large (4 / 5 applications at the same time).

The Ledger Nano S is compact and well built, buying it directly from the manufacturer, you will receive a sealed box with a transparent film, as Ledger, unlike Trezor, recently no longer uses burglary labels, but entrusts its security to the software of the operating system Bolos, in fact at each startup is done a check to detect any tampering, however, it is a good idea to check that the box is intact and that the device does not present any cracks indicating the opening of the plastic case, to avoid “man-in-the-middle” attacks.

What’s in the box

Inside the box you will find the Nano S, a small activation guide, a USB-Micro USB cable (not OTG), a shoulder strap and a key ring, and of course a note to write your “recovery seed”, the famous words encoded in BIP39.

We get right into it, you don’t have to be super technical to use hardware wallets and Ledger is one of the companies most attentive to the user experience, the platform to use the Ledger is LEDGER LIVE, it is a software available for Windows, Mac and Linux, and there are two mobile versions, for Android and iOS.

Once you install the software, open the interface you will find four options :

Now the first step is to insert a new pin of 4 or 8 digits, it serves to protect the device from access and if you miss it three times consecutively all the apps are deleted, and you will have to restore the wallet with the “Phrase Recovery” the Recovery SEED.

The second and most important step is to write on the supplied sheet the 24 words of the recovery seed, this is the private key of your wallet “translated” in BIP39 that is a series of words of sense usually made in English (to be exact 2048). When you write the 24 words on the sheet know that at that time your private key is coming out of the hardware wallet and obviously will have to be carefully stored in a secret place and away from your wallet, Do not write it on any online device and do not write it, it is the most important thing and if you miss it you can say goodbye to your cryptocurrencies, there is no “customer care” to call, if you miss it END OF GAMES.

After this the software will ask you to answer some questions, so as to confirm that the steps have been done correctly and you have understood what the pin is, and the recovery seed, finally a firmware check will be done to make sure it is official and has not been tampered with.

Finally, set a password for the “Live Ledger” software to avoid the possibility of curious people opening the software on your PC.

Now your device is configured, you just have to install the apps you want to use and start using it, installing the apps is very simple, it’s like adding an app on Android or iOS, install the cryptocurrency you want to start moving and you’re done.